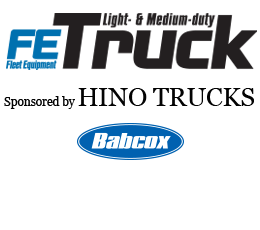 According to Ed Byk of Daimler Trucks North America, Detroit Diesel Corp. marketing, “There are a few advantages that four-cylinder engines provide for vocational customers. Typically four-cylinder engines are more fuel efficient and their smaller size can provide some benefits when it comes to packaging or what type of truck chassis it can be installed in. Customers are definitely receptive to the idea of four-cylinder engines in commercial vehicles.

“The critical thing is to make sure the engine is efficient, durable and, most importantly, that it gets the job done,” Byk adds. “After test-driving the DD5, our potential customers have come away with a favorable impression about how well a four-cylinder performs. These engines are very well suited for a variety of applications, including delivery vehicles that may be operating in urban environments. The four-cylinder can contribute to lower operating costs with their better fuel economy, and in our case with the DD5, with longer maintenance intervals.”

The DD5 is the first in-house engine from the new Detroit medium-duty engine group (MDEG). Available at launch for pickup and delivery application in 210 HP, 575-lb.-ft. and 230 HP, 660-lb.-ft. ratings, the DD5 will eventually power a variety of vocational applications, according to Detroit. Variable cam phasing (VCP) technology, unique to the DD5, helps optimize thermal management for improved aftertreatment performance, essential in low-load, stop-and-go applications like pickup and delivery, the company says.

“Even though diesel fuel prices are fairly low at the moment, we know that they can increase very quickly,” Byk continues. “In addition to this, emissions standards are getting tighter, which means that manufacturers need to be able to offer their customers more efficient engine choices such as four-cylinder engines. That’s why Daimler Trucks and Detroit has made a commitment to them by investing in our new medium-duty engine platform. This allows us to provide our customers with the benefits of our latest engine technology while meeting the emissions challenge. Our decision to offer both a four- and six-cylinder option ensures that the customer has the right engine for the job. In the case of the four-cylinder, it has all the power required for our intended target markets.”

The case for six-cylinder engines “Given the outstanding performance and durability experienced by fleets using Cummins six-cylinder B-series engine over the past 30 years, Cummins does not envision a convincing rational for introducing a four-cylinder engine to the medium-duty and vocational truck market in North America in the near future,” says Sumit Nema, B-Series product manager for Cummins. “Truck manufacturers currently specify the Cummins B6.7 across a wide power band extending from 200 HP to 360 HP suitable for every type of application, ranging from flat-bed to fire trucks, and from delivery to dump trucks. In contrast, a four-cylinder engine is generally limited to a peak rating of up to 230 HP and is almost exclusively confined to lighter trucks running on urban duty cycles.”

From a driving perspective, the advantage of the six-cylinder is its smoother, faster acceleration, especially when running at maximum truck payload or when extra torque is needed for climbing grades. “It is also clear that the inherent durability expected of a Cummins six-cylinder 6.7-liter engine could not be replicated by a lower displacement four-cylinder engine that will experience a higher Brake Mean Effective Pressure [BMEP] per cylinder,” Nema adds. “While it may be correct to say that engine downsizing can benefit some situations where the vehicle installation space is severely challenged, this situation does not apply to the medium-duty truck sector. Indeed, four-cylinder engines of five-liter and above displacement are almost the same size and weight as the highly compact design of the six-cylinder 6.7-liter Cummins.”

While some reduction in fuel consumption might be expected by downsizing to a four-cylinder, this benefit will be limited above 200 HP, as the engine will be performing at maximum effort. “In contrast, Cummins’ proven 6.7-liter engine operates with relaxed ease due to the higher displacement with two extra cylinders to spread the work across,” Nema says. “While it is sometimes inferred that a four-cylinder engine has lower emissions than a six-cylinder, in terms of PM and NOx there is no difference if both engines are running at the same horsepower.”

Cummins sees this four- vs. six-cylinder scenario as being more about engine “right-sizing” rather than “downsizing.” “What matters is more about using the ideal engine configuration for the truck size, duty cycle and the application it is used for,” Nema continues. “Note that these factors are distinctly different for medium-duty trucks operating in different regions of the world. For example, in North America, drivability and engine durability are considered far more significant than by operators than in Europe—which is why we have a four-cylinder version of the B engine platform available for regions with differing operational and vehicle requirements.”

“A smaller four-cylinder engine [gas or diesel] can provide better fuel economy in smaller or lower GVWR applications,” says Tim Stoehr, Ford’s general fleet marketing manager. “However, the exact opposite [decreased fuel economy] can occur if too small an engine is placed in a commercial vehicle.”

Ford offers a commercial vehicle lineup from Class 1 to Class 7, and provides a spread of engine choices to match the right engine to the specific applications.

When asked if Ford as seen increased interest in four-cylinder vans, Stoehr replied, “Our Transit Connect van, which created the compact van segment in North America, has offered four-cylinder engines exclusively since its introduction in 2009 and it has been very successful, delivering over 50% market share. It has become the vehicle of choice for small and large business owners across North America for many vocations such as package delivery, service, and taxi/shuttle.”

Last year at the NTEA Work Truck Show, Isuzu unveiled its 2018 FTR cabover, a true Class 6 (25,900 lbs. GVWR) powered by a four-cylinder diesel engine. At that time, Shaun Skinner, executive vice president and general manager of Isuzu Commercial Truck of America, said that “we believe this truck will work well for its intended market: urban delivery. We believe others will follow.”